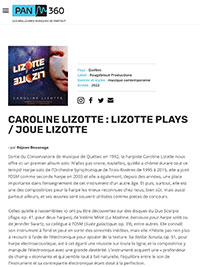 Even though harpist Caroline Lizotte has just released her first solo album, this is far from being her only accomplishment since graduating from the Conservatoire de Musique de Québec in 1992. Caroline was Principal harp for the Trois-Rivières Symphony Orchestra from 1995 to 2015, and joined the Montreal Symphony Orchestra (OSM) as second harp in 2003. She has also played a key role in teaching this grand and venerable instrument, and is one of the best-known harp composers in Quebec and abroad with her compositions often played in competitions.
The pieces featured here have appeared on albums by Duo Scorpio (Raga, opus 41 for two harps), Valérie Milot (La Madone, Lullaby for Solo Harp) and Caroline’s OSM counterpart, Jennifer Swartz (Suite Galactique, opus 30), just to name a few. Caroline knows her instrument like the back of her hand, producing novel sounds with the addition of electronic texture. Her Stellar Sonata, opus 51 for electroacoustic harp showcases her exceptional skill and artistry. The instrument acquires a surprising, seemingly natural “depth of field” striking a perfect balance between electric and acoustic sound.

Both harp parts in Raga are played by Caroline on this album along with some percussion instruments. The solo pieces Odyssée and La Madone are good examples of Caroline’s originality as a composer and her virtuosity as a musician, but Suite Galactique is really where Caroline shines, demonstrating considerable technique even adding her own accompanying vocals. This is a splendid and impressive album revealing the heart of the composer and her instrument.